Who is the best shooter within the Euroleague competition? To come up with some reasonable answers, this text analyses the last ten years of the competition and respective shooting data. Step by step, we apply different metrics to analyze shooting performances. Within this piece we will orient ourselves on a research paper published by Kirk Goldsberry (“CourtVision: New Visual and Spatial Analytics for the NBA”) presented at the Sloan Sports Conference in 2014.

What makes a shooter, a very good or excellent shooter is difficult to form within a definition. Quite a simple definition is implicitly brought up by the field goal percentage (FG %): the pure percentage of shots you make on the court. Fairly easy.

Nevertheless, within this classic box-score metric comes a strong bias: Some shots are rather ‘easier’. Big men with a relatively close shot range around the basket tend to put up better field goal percentages compared to guards who integrate the mid- or three-point range as a vital part to their game. The list of best shooters within the Euroleague competition according to the FG % is thereby dominated by players rather exclusively finishing around the rim. For example consider the shooting range and percentage of Brandon Davies in Figure 1.
Instead, players who rather stick with “tougher” shots, will be missing in this list.

A first advancement to that strongly biased FG %, is the effective field goal percentage (eFG %). In its basic design, eFG % is close to the FG %. Nevertheless, it integrates the fact that made three-point shots are more valuable than two-point shots and consequently weighs three-point shots higher in its calculations. To stress this point, consider the following two figures. To the left, the pure FG % are displayed, to the right the efficiency of shots (i.e. here the expected number of points per shot). For the FG % shots around the basket are the hot spot when it comes to the percentage of made shots. Three-point shots, according to FG %, spread no significant value or impact. To the right, the image is rather advanced. Given the expected points per shot, the value of three-point shot increases significantly. The difference between the evaluation of three-point shots between both images is equivalent to the advancement which the eFG % offers. 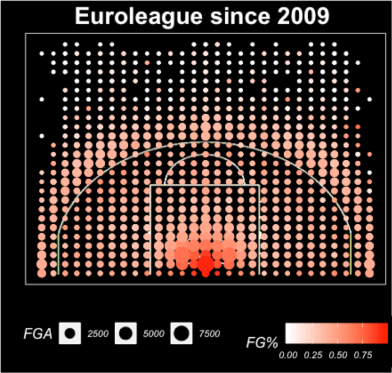 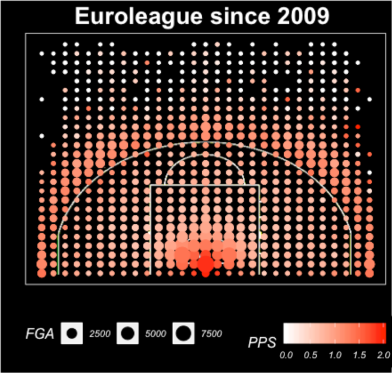 For the eFG % we observe a typical bell curve when designing a plot of eFG % to the number of taken shots (FGA). The plot helps us then to define first outliers who hold up an – at least average – eFG % over a large number of shots taken. Though, how does this graphic help us to determine the best shooters? Sure, we would need to find somebody within the tradeoff of enough shots taken and a good eFG %. Though, what shot amount has to be considered as necessary that the sample size is large enough?

By considering FG % and eFG % we consider shots within one (two) dimensions: the result of the shot (and the connected value to it, either two or three points). Now we take a step forward, integrating the coordinates of shots which, since 2009, are measured within the Euroleague. This data source is the foundation to shot charts. Also, we will use this data here to evaluate a player´s shooting ability on a more differentiated level.

Within the introduced paper by Kirk Goldsberry, two metrics are presented which try to find an answer to the question similar to the one of this writing. To make clear and translate the approach presented by Goldsberry, some technical concepts first. As shown in the presented shot charts within this article, the court is split up into a decent number of buckets. For each player we sort his shots into these spatial buckets. Now, two different metrics can be defined: spread and range.

Spread: simply a count of the unique shooting buckets in which a player has attempted at least one field goal.

Range: count of shooting buckets in which a player averages at least one point per FGA.

Summing up, spread and range summarize the variability of a player to shoot from different spots (spread) and the efficiency by which he scores from those spots (range).

Given the calculation of these metrics, there are some, more or less, obvious relations to other statistical values.

First, the spread value for each player highly correlates with the personal FGA: a player who takes more shots is on average more likely to shot from more unique spots. Sounds reasonable. This mechanism is displayed within Figure 5. Nevertheless, you can think of players above the blue-marked average estimation as more diverse shooters. Consider players with more than 1000 FGA: for those players you can clearly observe huge differences in the spread value. Some account for spread values just above 20, others even above 60. An almost identical mechanism, to keep the text short, can be observed for the relation of the range metric and FGA.

Second, we can observe a correlation between both the values of spread and range. Figure 6 displays this mechanism within the data:  as the spread number of a player increases, the respective range metric does so, too. Again, the average approximation in blue helps us to identify players above or below average within. Here, ‘above average’ indicates players who shoot ‘efficient’ from more spots than other players with a similar number of unique shooting spots do.

Given all these theoretical discussions, let us finally get to the answer of our research question: who is the best shooter (given spread and range metrics)? Listed below, find the shot charts of the resulting top players for both range and spread. The numbers are based on data of the past ten years. 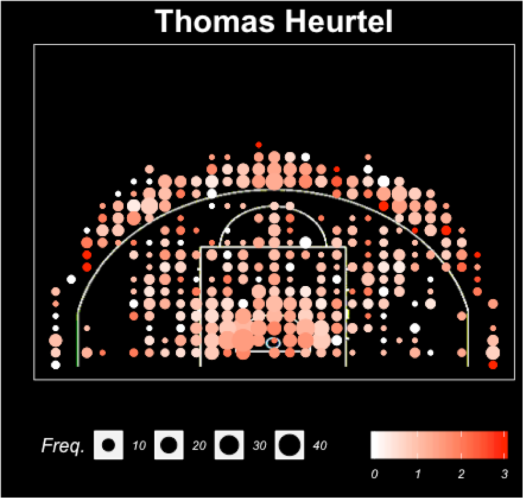 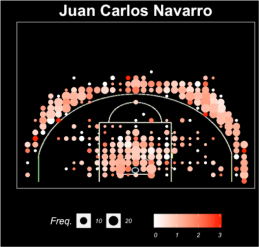 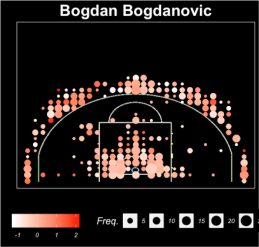 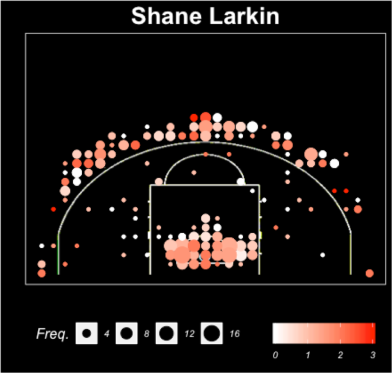 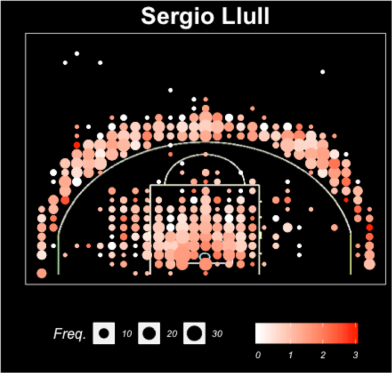 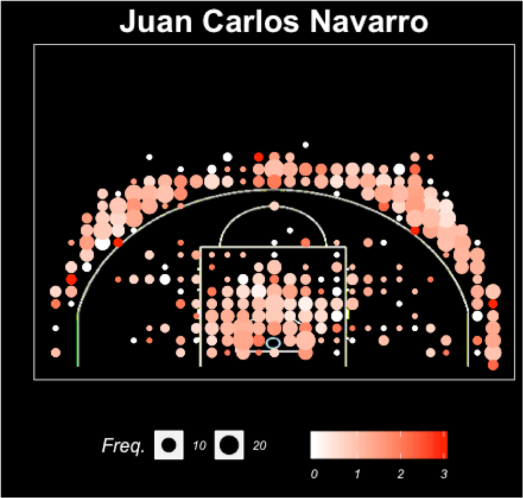 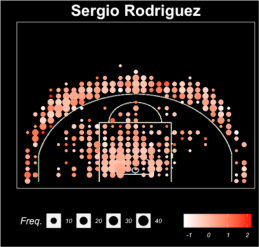 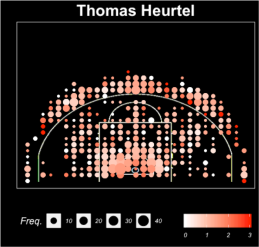 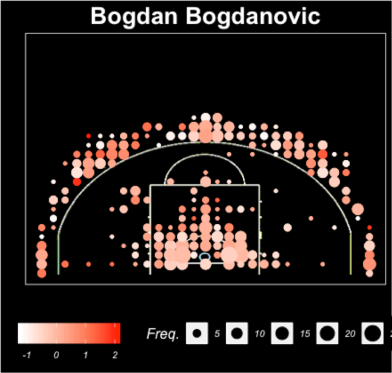 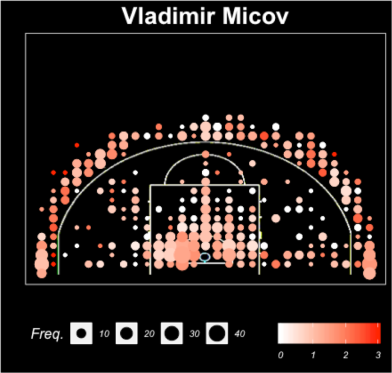 Coming back to the discussed correlations between spread and range metrics, it is intersting to see the number of players within both top-5 lists: Heurtel, Navarro, Bogdanovic. Earlier on, we observed how the spread and range metrics are highly influenced by the number of shots taken. No surprise then, that all these players hang around Euroleague competition for quite a while. Over the years, they proofed their ability to go with many different spots on the court  while managing to maintain a high efficiency from most of ‘their spots’. The number of FGA of a player is therefore a significant factor to determine spread and range. If that is a relevant factor to “who is the best shooter”, depends on the respective definition. Though, if we want to decrease the impact of FGA, one would need to divide all these numbers by the FGA of a player.

Considering that Larkin and Bogdanovic got significantly less shots than Llull, should we rate it in their favor, as they needed less shots to get their spread and range ratings up? Or, is  Llull the best shooter since he was able to sustain these numbers? It is a tradeoff for evaluating the shooters to think about.