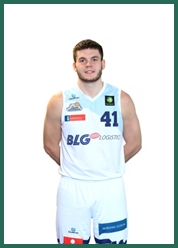 William Vorhees signed his first pro contract with German ProA-club Eisbären Bremerhaven after graduating from Notre Dame College. He played NCAA Divison II basketball with them and averaged 28.8 points and 11.3 rebounds in his senior season. His new team just got relegated from BBL and looked to move up as soon as possible, compiling a strong roster around experienced US-imports Kasey Hill and Rhondell Goodwin. Vorhees proved to be the inside addition they needed as he became their 3rd best scorer (12.7 PPG) and best rebounder (6.2 RPG).

Low-Post Game. Was mainly used in the low-post where he could power his way inside with his physicality. Has some solid moves in the post and likes to finish over his right hand. Uses pump-fakes to get defenders in the air and finish afterwards. Doesn’t draw a lot of fouls with this so far but shows signs of developing into a good post-up player that beats opponents with power instead of athleticism.

Shooting. After shooting 29% from three in his senior season in college, Vorhees proved that he can be a decent long-range shooter on pro level. He made 29 of his 80 threes for a solid 36.3 percent. Some of those were a bit rushed or without good preperation but he mostly showed that he can be a threat as a stretch big. He is able to score out of pick &pop situations and exploit traditional centers that like to stay back in the paint.

Offensive Rebounding. Is a real fighter at the glass. Doesn’t always look super pretty but he creates second chances for his team. Pushes his opponents under the basket and gets into good rebounding positions. Just has to watch out that he’s not overly aggressive and commits too many fouls this way.

Mobility. Was used as a smallball center at times and clearly had advantages due to his mobility. Liked to use these in the pick & rolls where he could roll to the basket quickly and beat slower centers. Is also able to run the floor well as a center and outrun opponents to receive outlet-passes.

Defensive Physicality. This described physicality also transfers to the defensive end. Vorhees understands how to use his body against physial guys inside, being able to defend 4s and 5s. As on the offensive end, he can bully opponents and force them to take tough shots. He even does too much at times when he tries to get his body or arms in the way, resulting in personal fouls on him.

Shot selection/Finishing. Is not a polished inside scorer yet. Makes his moves and gets into good scoring areas but has problems finishing it – especially with his left hand. Sometimes not sure how to finish certain actions as his coordinaton seems not to be perfect yet. Has a pretty strange variety in his misses as some were pretty far off. Especially when he was working from the high-post and tried to drive to the basket, things got difficult. His ballhandling is not the best yet, he has problems staying under control which led to crazy shots around the rim.

Foul management. Averaged 3.2 fouls in just 24 minutes per game. Really limited his playing time as he had three or more fouls in 20 of his 27 games (was fouled out five times). Too many of those fouls were unnecessary and far away from the basket. Needs to learn when to be aggressive and when to keep his hands away to give the refs less chances to call fouls. Especially after misses from his own team, he tends to reach in after the opponent secured the defensive rebound which makes no real sense.

Basketball IQ/Body Language. This all boils down to Basketball IQ where he still needs some time to adapt to the European playing style and everything related to that. His unnecessary fouls led to substitutions and therefore frustration at times, which you could see on the court and on the bench where he would look down or shake his head. On one hand, this shows how ambitious he is and that he is not satisfied. On the other hand, his team was winning 20 of 27 games, so you would expect a more positive body language overall.

Will Vorhees played a promising rookie season overseas and proved that he can definitely compete on the ProA-level. His ablity to play both big man positions will give any team a lot of flexibility under the basket. Especially the combination of the way he uses his physicality to get good looks inside/rebound the ball and his mobility makes him an intriguing player as a possible smallball center. If he now continues to develop his three-point shooting and understanding for the European game, his sophomore season should be even more successful.