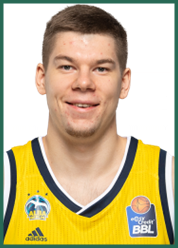 Rokas Giedraitis is one of the most wanted players in the Euroleague this summer. He is still under contract with ALBA Berlin until 2021 but there were already reports that multiple Euroleague teams will try to buy him out and that even the NBA could be in play. This is not a huge surprise considering the fact that the Lithuanian has shined in his first Euroleague season 2019/20 and in his two years with ALBA overall. He came as kind of a replacement for other Lithuanian wing Marius Grigonis who left Berlin for Zalgiris Kaunas after an amazing first year in summer 2018. At that point Giedraitis was not really on the European Basketball map yet, having only played ins his home country (for Rytas Vilnius in Eurocup). This changed during his time in Berlin, as he was one of their keys to success, providing lights-out shooting from deep with second to none off-ball movement in Aito’s free-flowing offense.

Shooting. Has developed into one of the best shooters in Europe. Has a super quick release which gives him the chance to pull off from impossible angles. Is at his best in catch & shoot-situations. ALBA likes to run him around several screens which gives him the tiny bit of daylight he needs to catch and release a shot under control. Doesn’t need a lot of time to set his feet and can immediately rise up after receiving the ball and adjust in the air. This makes him so tough to guard for any opponent as he only needs one good screen to get the job done. In addition to that, Giedraitis doesn’t shy away from taking tough shots. He needs to be picked up early in transition, otherwise he’ll just pull up with 20 seconds on the shotclock and punish lazy transition defense with three points.

A contest from the defense doesn’t bother him a lot, as he is still shooting it with a high percentage with a hand in his face. He needs to be run off the three-point by the defense to completely prohibit that shot. But Giedraitis has already developed a counter as he is able to pump-fake and side-step into a three.

Off-ball game. Really benefited from ALBA’s playing style. They liked to have a free-flowing offense with multiple options out their sets and the possibility for everyone to break out and create. Giedraitis loves to run around screens from one side to the other and make defenders go crazy. His off-ball movement is one of the best you could see in Germany, predicting the movements from the defense and adapting to it quickly. If the defenders goes over a pindown, he can quickly flare out to the side and create more space for his shot.

He knows where to be around the perimeter to open passing lanes and get good looks. He is really good at re-positioning himself behind the three-point line after a drive or rebound, which makes it so tough for the defense to keep up with him all the time.

Athleticism/Transition. Doesn’t seem like a very athletic player from the outside but can really finish above the rim. Is a threat in transition and after (backdoor-) cuts where he goes up strong and finishes with dunks. Was even an alley-oop target at ALBA with specifically plays designed for him.

Off the dribble/On-ball creation. The obvious task when defending a great shooter is making him put the ball on the ground and go to the basket. If the player is able to do both, you have a problem and have to pick your poison. Looking at Giedraitis, this is a very good idea because the Lithuanian has not shown to have the best dribble-drive and on-ball game yet. His 1.35 points per possession on catch and shoots plummeted to 0.56 PPP when he has to catch and drive.

As already shown, he is a pretty good athlete but he hasn’t combined that with good ballhandling and strong finishing in traffic yet. Most of his dunks come in transition or after cuts, as he has problems attacking a defender off the dribble. He is just not quick and explosive enough to easily get by other forwards so he is opting for awkward floaters over rim-protectors at times or just throws it up after crashing into defenders.

This is the reason why more than 75% of his offensive actions come out of off-screen-, transition or catch & shoot-situations. His time on the ball is really limited as he hasn’t developed a real go-to-move in such situations and mainly has to rely on his teammates to create shots for him.

Defensive Physicality/Quickness. On the defensive side, Giedraitis lacks both of these two vital things, physicality and lateral quickness. He is listed at only 88kg at 2,01m which you can clearly see, especially if he has to go up against bulkier forwards. So he can’t switch on 4s and although his athleticism is nice, he is not able to really challenge shots at the rim as a help-defender. Strong opponents just can go through him and still finish with their layup. In addition to that, he tends to get pushed around when trying to go for a rebound. He’s not always strong enough to keep opponents on his back and box out properly.

On the other hand, Giedraitis has his problems when having to defend quicker ballhandlers. He is laterally rather slow and gets beaten when he is too aggressive on the ball or has to fight around screens to keep up with his opponent. This makes him kind of a point of attack at times which is why his defensive matchups should be chosen wisely.

Versatility. Due to these cirucmstances, Giedraitis is limited and therefore not really versatile. He is usually too slow to defend guards and not physical enough to go up against big forwards which makes it not possible for him to play other positions. Though in modern Basketball a lot of coaches value players who can be utilized in a variety of ways to create different lineups and schemes. With Giedraitis you’ll have a player that excels in a specific role but won’t get you a lot of versatility. That’s something you always have to keep in mind when adding the Lithuanian to your team.

With his 28th birthday coming up in August, Rokas Giedraitis’ best time in Basketball might just start now. After his impressive seasons with ALBA under coach Aito, you’d expect him to be ready to take on an even bigger challenge. The reason he is so intriguing for clubs on the highest level, is the fact that he doesn’t need the ball in his hands to make a huge impact. Solely the way he shoots the ball and creates space due to his gravity, can make him such an important piece of a winning team. It will be tough for any defense to chase him around screens and get a hand in his face before he can shoot it with his quick release. It just needs a coach that knows how to use him in his system and it can be a very successful story as the last two years have shown. If he wants to go above the status of a perfect Euroleague roleplayer, he might want to improve one of those areas mentioned above.